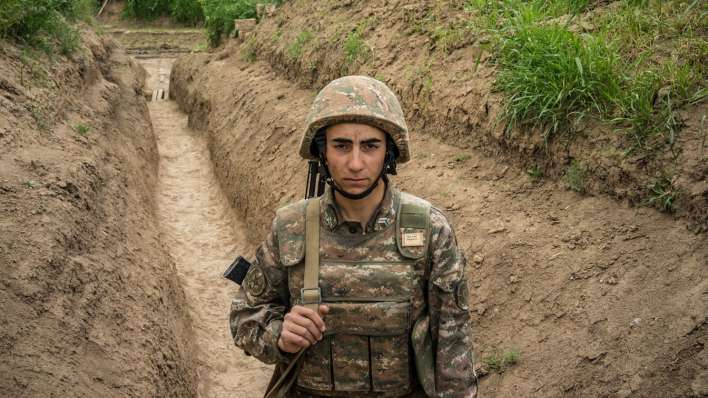 On Sunday, Azerbaijan began shelling Armenian positions in Nagorno-Karabakh — a disputed piece of territory in the Caucasus peopled primarily by the Armenians but owned, at least on paper, by Azerbaijan. In the 1920s, Soviet administrators, disregarding demography, had placed Nagorno-Karabakh inside Azerbaijan. In the run-up the USSR’s demise, the local Armenians voted overwhelmingly to secede from Azerbaijan in a referendum and proclaimed independence. Nobody recognised the result. And when the USSR collapsed, the place ended up inside the internationally recognised borders of Azerbaijan. A terrible war ensued. Armenia seized Nagorno-Karabakh and adjacent lands, Russia brokered a ceasefire, and an international forum called the Minsk Group was convened in 1992 to prod the two parties to settle their differences without spilling blood.

In the 28 years since, thousands of people have been killed — and hundreds of thousands displaced — in a series of outbreaks of hostilities. Nagorno-Karabakh has justly been called the ‘most dangerous unresolved conflict in wider Europe’. It has the potential to suck Russia and Turkey into a wider conflagration — Russia nominally backs Armenia, while also selling arms to Azerbaijan, and Turkey supports Azerbaijan.

Dozens of civilians have already been killed in the new round of fighting that began on Sunday. Armenia, once the clear superior, is now confronting a phenomenally well-equipped rival. While Moscow has said little, Turkey — which a century ago liquidated 1.5 million Armenians in a genocidal campaign that lasted two years — is now relocating to the Caucusus the mujahedin it deployed to Syria to topple Bashar al-Assad. Recep Tayyip Erdogan, the Turkish president who refuses to acknowledge the Armenian genocide, has pledged to support Azerbaijan by ‘all means’ necessary.

Armenia has declared a state of emergency. Nikol Pashinyan — the prime minister of Armenia who is known as the ‘Gandhi of the Caucasus’ for his part in the peaceful pro-democracy revolution some years ago — has called on his compatriots to ‘stand as soldiers’ of the Armenian nation. This is an admission of the gravity of the challenge. A day after the shelling began, I spoke to Pashinyan on the phone from India. In his first interview with a foreign journalist since the outbreak of the new war, Pashinyan, exhausted but determined, laid out the Armenian side of the story and described the ongoing events as an ‘existential threat’ for the Armenian people.

Kapil Komireddi: In your speech to parliament on Sunday, you described what’s happening in Nagorno-Karabakh as the ‘most important milestone’ in Armenia’s struggle for survival. Does this mean Armenia is now at total war?

Nikol Pashinyan: Azerbaijan launched a pre-planned aggression against the people of Nagorno-Karabakh. As you know, Armenians are living there. We have a moral and political duty to defend our compatriots there. Armenia is the guarantor of the security of Nagorno-Karabakh. The situation is now escalating, as Azerbaijan continues to shell Nagorno-Karabakh in an attempt to impose a solution through military force, which, by the way, is done with Turkey’s direct support.

KK: What are the casualties on your side?

NP: There are several dozen casualties amongst civilians and military personnel. Because the fighting is underway, I can’t give a conclusive number.

KK: If this war is nothing short of a struggle for your survival, are you fighting it alone — or have you received assurances of support from your long-term partner Russia?

NP: I would like to stress that it is very important to understand what the Nagorno-Karabakh conflict is about. Reading the headlines of the international media, I understand that there is a serious misunderstanding. It is not a territorial dispute between Armenia and Azerbaijan. The issue is the right of self-determination of the people of Nagorno-Karabakh. The region ended up in the territory of Azerbaijan through arbitrary decision-making in the Soviet Union. Armenians were always under threat. It was latent at first but became visible later. When the collapse of the Soviet Union started, Armenians decided to exercise their right of self-determination: just as Azerbaijan seceded from the Soviet Union, similarly Nagorno-Karabakh seceded from Azerbaijan. By the way, it was a totally peaceful process. Azerbaijan from the very beginning responded to this process with force, with pogroms, with killings. And the conflict started from that point. The international community, unfortunately, has a deep misperception of the essence of the Nagorno-Karabakh conflict. It is not about territory. It is about people, about humans, about security. Armenians of NK, who were always the largest majority of Nagorno-Karabakh, wish to exercise their right to freedom, independence, and self-determination.

KK: Have you received any assurances of support from Russia?

NP: As far as our partners are concerned, I would like to say that the position of Russia is totally neutral in the current process.

KK: That’s interesting. You say the position of Moscow, your nominal protector, is neutral. Ankara, Azerbaijan’s patron, is anything but. The president of Turkey has squarely blamed Armenia for the ongoing hostilities. He has thrown his support behind Baku and pledged to adopt a ‘one-nation, two states’ approach. Turkish state media have been spotted on the frontlines. Would you say this is a coordinated attack? If yes, does Armenia have the capability to resist and to prevail on its own against Azerbaijan and Turkey?

NP: It is obviously a coordinated action by Turkey and Azerbaijan. Turkey is managing the whole process. They are not trying to hide this. It is actually a very public process. I mentioned the existential threat faced by the Armenians of Nagorno-Karabakh. But as you mention Turkey, consider the existential threat that Armenians have faced from Turkey through our history. As you know, the first genocide of the 20th century was committed in Ottoman Turkey, when one and a half million Armenians were killed. So far, Turkey has not only refused to recognise the fact of the Armenian genocide —Turkey is in fact continuing its genocidal policy towards the Armenians. And as far as our capabilities are concerned, I’ll repeat: this is an existential threat for us, and there is nothing else to do but to defend ourselves.

KK: Should Nato be concerned that one of its members is, as you suggest, spearheading and orchestrating a lethal enterprise of this nature?

NP: Let us view this whole process as a part of Turkey’s broader regional policies. Think about what is happening in the Mediterranean and the Middle East. What Turkey is doing there is part of its imperial aspirations. It has nothing to do with strengthening Nato. This isn’t only about Armenia’s security. It is about the whole South Caucasus. It sheds light on the destabilising role of Turkey in the entire region.

KK: The Minsk Group has urged both sides to cease hostilities immediately and to resume negotiations. Has there been any attempt by Armenia or its partners to pursue dialogue through diplomatic channels?

NP: When I became prime minister of Armenia, I proposed a formula for Nagorno-Karabakh: any resolution of that conflict should be acceptable to the people of Armenia, to the people of Nagorno-Karabakh, and to the people of Azerbaijan. I was the first Armenian involved in the negotiation process saying that any solution should be acceptable to the ‘rival’ side, too. My hope was that the Azerbaijani president would reciprocate in a similar spirit. Unfortunately, he did not. He insisted that only Azerbaijan mattered. And the Azerbaijani president used bellicose rhetoric, saying that he was going to solve this conflict through military force and that the diplomatic goal was to realise the military ambition of Azerbaijan. So far, the Azerbaijani president’s diplomacy is a military tool. In that situation, in that atmosphere, it is very difficult to sustain talks and diplomacy.

KK: So you have no contact with — you have not opened any channels with — Baku at the moment?

NP: No. But we are in contact with the Minsk Group co-chairs.

KK: The so-called ‘four-day war’ of 2016 culminated in a stalemate. But it was enormously helpful to president Ilham Aliyev of Azerbaijan. What do you suppose might be the motive behind this round of aggression?

NP: My belief is that only democratically-elected governments are able to find compromise and accept peace formulae. The problem is that within his presidency, Ilham Aliyev developed in Azerbaijan an anti-Armenian hate atmosphere. 'Armenian' in Azerbaijan means enemy — an enemy that should be killed. Now, that hate atmosphere is exploding, becoming a reality.

KK: You told parliament on Sunday that there was ‘nothing unexpected about what happened’. If you were anticipating this, why did you not do everything to stop this from happening?

KK: Before becoming prime minister, you were a journalist and a human rights activist. Armenia has made significant progress since you entered office. Those gains, already imperilled by the pandemic, will almost certainly be wiped out by war. You have been described as the Gandhi of the Caucusus. What is the price you are willing to pay for peace?