Why Stakes Are Raised in the Azeri-Armenian Conflict. Bloomberg (WP) 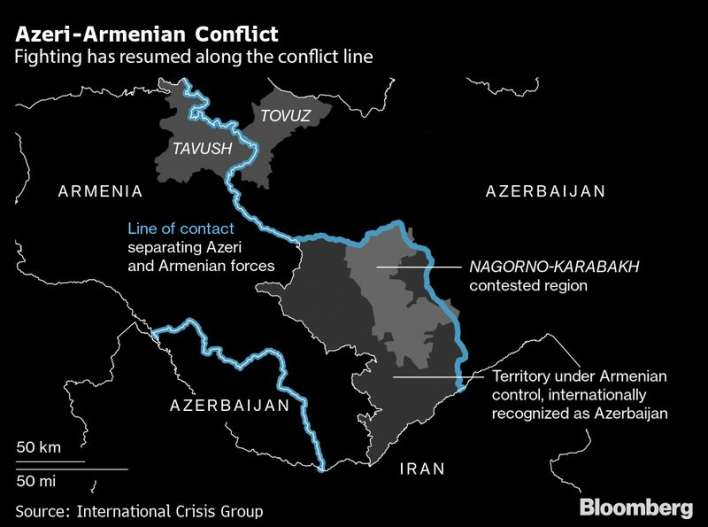 Conflict over Nagorno-Karabakh has broken out repeatedly since Armenians seized control of the territory and surrounding areas from Azerbaijan, in a war that started soon after the 1991 collapse of the former Soviet Union, killing more than 30,000 people and displacing another 1 million. Despite decades of mediation by the U.S., Russia and France, no peace accord was ever signed. The latest bout of fighting that started Sept. 27 differs from many previous skirmishes since the end of the war in 1994, both in scale and in geopolitical risk. This time, Turkey has given unreserved backing to its ally Azerbaijan, raising the stakes significantly.

1. What’s the root of the dispute?
Today’s Armenia and Azerbaijan were for centuries situated in fluid borderlands between the Russian, Ottoman and Persian empires, with both suffering partition and brutality at the hands of much larger powers. The two communities began to fight each other as those empires collapsed toward the end of World War I and they sought to form independent states, with Russia backing Armenia and Ottoman Turkey supporting Azerbaijan in what amounted to a proxy war. Nagorno-Karabakh was a center of tension from the start, because the mountainous region hosted a mixed community of Armenians and Azeris and was seen by both nations as central to their national histories and identities.

2. What role did the breakup of the Soviet Union play?
After the Soviet Union took control of both nascent states in 1921, its leader Josef Stalin sowed the seeds for today’s dispute. He gave Nagorno-Karabakh to Azerbaijan but then in 1923 carved it out as an autonomous region, with borders that gave it a population that was more than 90% Armenian. The first violence of the current conflict broke out in 1988, as it became clear that the days of the Soviet empire, too, might be numbered. Tensions soared as the two Soviet Republics began to press for independence, giving new meaning to what had in essence been internal administrative borders. Pogroms of ethnic Azeris in Armenia and of ethnic Armenians in Azerbaijan followed. In February 1988, Nagorno-Karabakh’s national assembly voted to dissolve its autonomous status and join Armenia.

3. How has Armenia’s history contributed to this?
Although the Armenian and Azeri communities of Karabakh lived together peacefully and were relatively well integrated until 1988, Armenia’s history in particular conspired to create a tinderbox of nationalist feeling. The 1915 genocide, in which the late Ottoman regime killed as many as 1.5 million Armenians as it drove them from Anatolia, left deep scars. Fear of Turkey left Armenia feeling unusually dependent on Russia for military support after the Soviet collapse, and many Armenians came to see Azeris as proto-Turks, eliding the threat. In fact, the two are distinct. Azeris are Turkic speaking, but they are mainly Shiite Muslims, whereas Turks are mainly Sunni.

4. Why is Turkey involved and what are its goals?
Turkey has a closed border and no diplomatic relations with Armenia, in large part due to its refusal to recognize the 1915 genocide. By contrast, Azerbaijan supplies Turkey with natural gas and crude oil via pipelines that pass within 10 miles (16 kilometers) of the Azerbaijan-Armenia border and 30 miles of the conflict zone. As a result, Turkey has long sided with Azerbaijan on the Karabakh dispute. That support was until recently limited to rhetoric. But in July, after a previous Armenian-Azeri clash, Turkey’s military conducted joint exercises with Azerbaijan’s. On Sept. 28, Turkish President Recep Tayyip Erdogan called Armenia to end its “occupation” of Azeri territory and criticized the current negotiating format, which excludes his country, for doing “everything possible not to solve the problem.” Although Erdogan’s precise goals are uncertain, the change comes at a time when he is using hard power to press Turkish interests across much of the former Ottoman space, including against Russia in Syria and Libya, and against Cyprus, Greece and Israel in the Eastern Mediterranean. 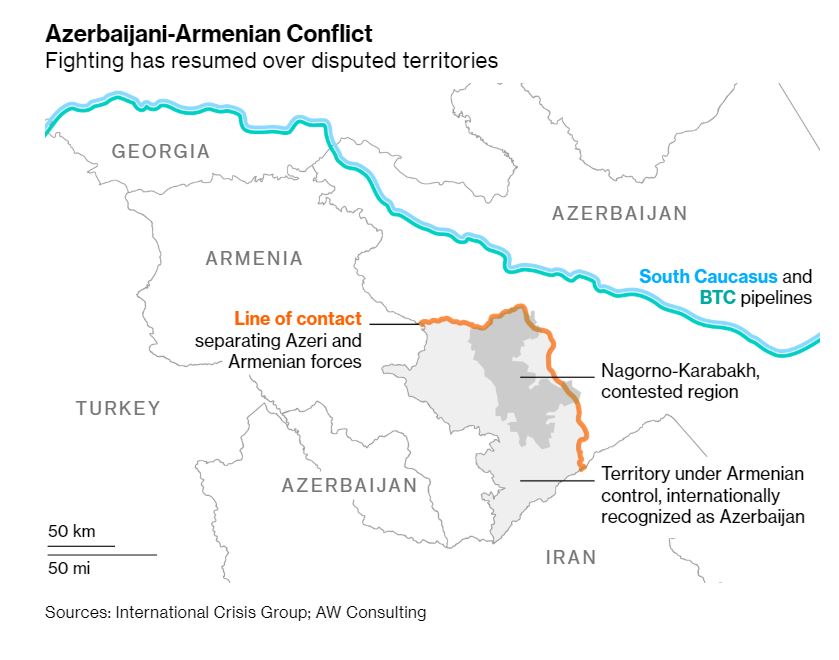 5. What leverage do the U.S., Russia and France have?
As a nearby nuclear superpower and former overlord, Russia has leverage with both sides. Armenia hosts a large Russian military base and is now more dependent than ever on the ultimate guarantee that provides, should Azerbaijan try to take back the land it lost in 1994. Since then, Azerbaijan’s oil and gas wealth have allowed it to substantially increase its military spending – much of which has gone to purchasing weapons from Russia, which arms both sides. The U.S. used to also wield considerable influence, as host to a large, wealthy and politically active Armenian diaspora and the primary backer of new Azeri oil and gas pipeline routes that skirt and compete with Russia’s transit network. But in recent years, U.S. interest in the region appears to have ebbed. The leverage of France, as a representative of the European Union, also appears to be in decline.

6. How does the conflict affect oil and gas supplies?
Energy markets have reacted calmly to the upsurge in fighting, despite the potential for an attack on the Baku-Tbilisi-Ceyhan oil pipeline. The BTC has a capacity of 1.2 million barrels per day, but it normally operates at only half that level. With large surpluses available on the global market amid soft demand, the threat of a stoppage does not seem to have been enough to move oil prices. The South Caucasus pipeline, which runs alongside the BTC, delivered 9.2 billion cubic meters (325 billion cubic feet) of natural gas to Turkey in 2019, and is due to start supplying Greece and Italy with up to 3% of the EU’s total supply next month. But again, demand is currently weak. Armenia has yet to attack Azerbaijan’s pipelines during the 30-year conflict.